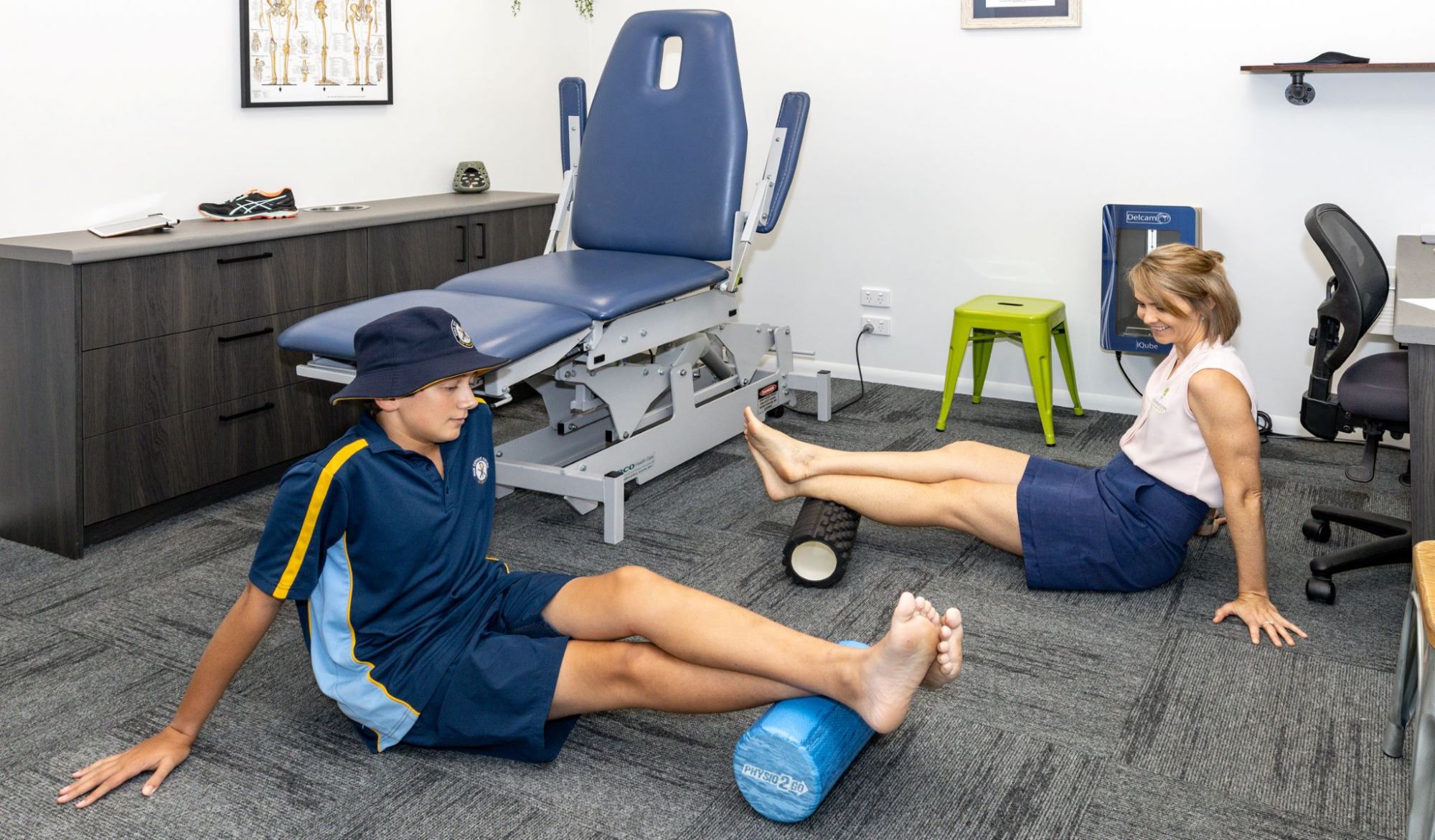 Apophysitis and osteochondrosis are common causes of bone pain in children and adolescents – but have different causes and require different treatment.

Osteochondrosis presents less commonly and refers to degenerative changes in the epiphyseal ossification centres (growth centres) of growing bones. Unlike apophysitis which is a mechanical overuse injury, the cause of osteochondrosis is unknown. Possible causes include genetic causes, hormonal imbalances, mechanical factors, repetitive trauma, and vascular abnormalities.

Locations of osteochondrosis include the navicular bone in the foot (Kohler’s Disease), 2nd metatarsal head (Frieberg’s Disease) and most common the femoral head (Perthes Disease).

Apophysitis injuries are self-limiting (meaning the pain will eventually resolve on its own once the growth plate closes), however there are many treatment options to manage the child’s pain which allows them to continue participating in sport.

Osteochondrosis need to be managed appropriately and ASAP to avoid lifelong complications.

Calcaneal Apophysitis is a condition that affects the apophysis (growth plate) of the heel bone in children between the ages of 8 and 14.  It is common in sports that involve high impact such as jumping and running, for example soccer, football, hockey, basketball, gymnastics.  Pain is usually worse during activity and usually settles with rest and for some children there will be a noticeable limp when they run or walk.  Occasionally there may be pain first thing in the morning when getting out of bed or after periods of sitting down.  There is no swelling or redness at the heel but it is usually painful to touch.   The heel bone has two very large structures that attach to it, the Achilles tendon at the back and the plantar fascia at the bottom.  During growth, these structures can pull on the heel bone which can aggravate the growth plate in the heel which contributes to pain during activity.  This is usually a self-limiting condition, which means that it resolves of its own accord and rarely causes long term complications, although intervention from a podiatrist is often needed to assist with managing symptoms. 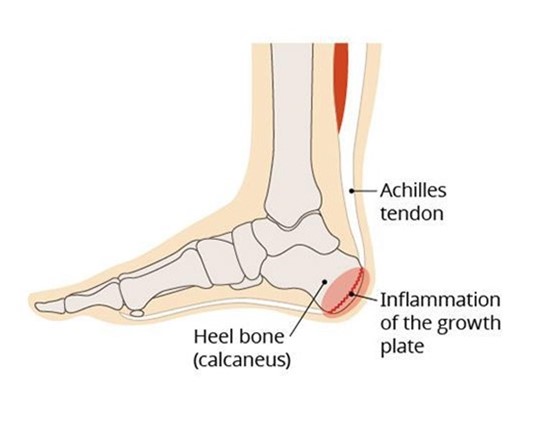 Iselin Disease is a condition that affects the apophysis (growth plate) of the 5th metatarsal on the outside of the foot.  It most commonly affects children between the ages of 9 and 13 years who participate in high impact sports such as soccer, football, gymnastics, dance, basketball and netball.  Pain occurs during activity and usually settles with rest.  The apophysis develops between the ages of 9 and 13 years at the base of the 5th metatarsal, which also provides the attachment for the tendon of peroneus brevis.  The peroneus brevis muscle assists with fast running and supporting the outside ankle and foot.  It is thought that this condition is mostly related to over-use and traction of the peroneus brevis tendon and the apophysis although sometimes trauma to the outside of the foot may also trigger the condition.  There maybe redness and swelling and it will be painful to touch often resulting in a limp during walking and running.  This condition tends to settle once the growth plate fuses with metatarsal.  Intervention from a podiatrist is often needed to assist with managing symptoms. 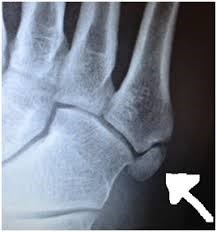 Kohler's Disease is a condition that affects the growth centre of the navicular bone.  This condition usually affects children between the ages of 3 and 7 and is more common in boys.  The navicular is a bone on the inside of the foot which plays an important role in forming the arch of the foot.  It has a large tendon, tibialis posterior, that attaches to it which also helps to maintain the height of the arch and assists the heel to lift of the ground during walking and running.    The cause of Kohler’s disease is unknown however it is thought to be related to a disruption in blood supply to the navicular bone which could be aggravated by compression of the bone.  It usually affects one foot and will result in pain and limping by trying to walk on the outside of the foot.  Pain may also be present at night or during periods of rest.  A low arched foot or a very high arched foot can be at a greater risk of developing Kohler’s disease due to increased compression on the navicular.  If this condition is left untreated it can result in permanent damage to the navicular causing it to be misshaped and leading to osteoarthritis.  Treatment often involves reducing the compressive loads acting on the navicular with intervention from a podiatrist needed in most circumstances. 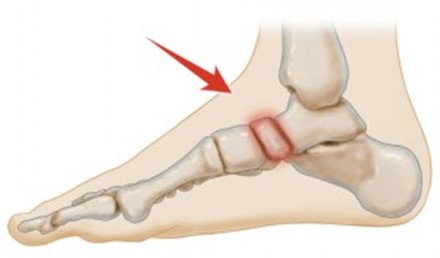 Frieberg's Disease is a condition that affects the long bones in the foot, usually the 2nd or 3rd metatarsal.    While this condition can occur at any age, it commonly presents during adolescence in the second decade of life.  It is thought that a spontaneous disruption in blood supply causes weakening and damage to the bone, however the cause is currently unknown.  Pain occurs during activity and there is often swelling and restriction in movement near the area which results in limping during walking.  It is important to treat this condition as early as possible to avoid long term damage to the metatarsal.  Intervention from a podiatrist is needed in most circumstances. 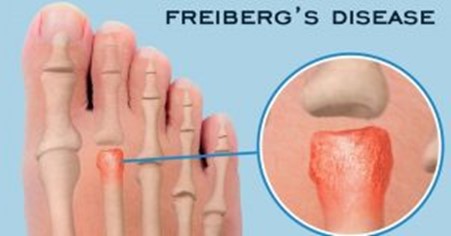